Remembering the Fort McMurray Fires of 2016: How a country and the Red Cross responded (en anglais seulement)

As Canadians, one of the things we as a collective have always prided ourselves in is our country’s global humanitarian efforts and our reputation for aiding those in need. Recent history has been marked with countless instances of Canadians putting their time, money, and even lives on the line all in the name of helping others; world wars, the invasion of Holland, the Iranian hostage crisis, peace-keeping efforts, and more recently our endeavors to help countries brutally affected by COVID-19, to name a few. However, what happens when the crisis is in our own country and it’s our fellow Canadians that need help? Five years ago, we received the answer to this question, when tragedy struck a small Canadian town and the whole country responded.

For the majority of Canadians, the morning of May 1, 2016 began as any other. The mild Sunday marked the beginning of springtime in Canada and was a welcomed change after the long haul of winter. People were eager to get outside to enjoy the warmer air and begin their morning routines. However, for the residents of Fort McMurray, Alberta, enjoying the budding sprig morning would be the furthest thing from their collective realities. What began as small wildfire in the surrounding forests of the Albertan town would quickly intensify, prompting the provincial government to declare a local state of emergency followed by the largest fire-related evacuation in the province’s history. Within 2 days, the blaze had reached the town, forcing more than 80,000 people to flee their homes and community, 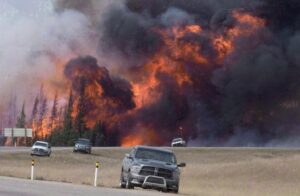 A wildfire burns through a forest south of Fort McMurray, Alta., on Highway 63 on May 7, 2016. Jonathan Hayward, the Canadian Press

bringing only a few belongings and the clothes on their back. Walls of fire lined the sides of the roadways as residents drove to nearby aid stations, where the Canadian Red Cross had already begun their long list of support measures.

In almost every major crisis around the globe, Red Cross societies have always been amongst the first organizations to respond due to their massive international reach and ability to mobilize support campaigns almost immediately. In the case of the Fort McMurray fires, the Canadian Red Cross was no exception. When the province of Alberta ordered a mass evacuation, Red Cross Canada sprang into action by deploying support workers and volunteers, and launched one of the largest domestic emergency campaigns in addition to the most successful text-to-donate campaign of the time. By utilizing a multitude of promotional channels- such as social media, carrier messaging, public service announcements, television and radio etc.- the Canadian Red Cross were able to quickly send out their calls for help and Canadians were even faster to respond. Within a matter of days:

Thanks to the generous outpouring of donations both through the mobile giving channel and other avenues, the Canadian Red Cross was able to provide aid to more than 28,000 households in need to help rebuild a community.

September 30 is the National Day for Truth and Reconciliation, also known as #OrangeShirtDay, honouring the children who never returned home, survivors of residential schools, and the families + communities that continue to deal with generational consequences today. #NDTR2022 pic.twitter.com/qkrDxTzGM4

Bringing together NGOs from Canada + Africa, @CrossroadsIntl aims to advance gender equality & eradicate poverty in some of the poorest countries. Learn more about this work at tonight's Gender Equality Open House. Text CROSSROADS to 20222 to donate $25. cintl.org/news/events/op… pic.twitter.com/lG56OJ1zGd