If You Tweet it, They Will Come: Chatting with the Nova Scotia SPCA About the Powerful Relationship of Social Media & Text-to-donate (en anglais seulement)

Have you checked your Facebook today? Did you scroll through your Twitter feed or spend a concerning amount of time on TikTok? Maybe you posted a cute photo on Instagram or read an interesting article on LinkedIn. Regardless of your platform of choice, it’s becoming increasingly difficult to envision a world without social media. Since its clunkier days of MySpace in the early 2000’s, to the introduction of the Metaverse, social media and the online sphere has become such an integral part of people’s everyday lives, beyond anyone’s imagination. In fact, a recent study by IDC Research found that within the first 15 minutes of waking up, 4 out of 5 smartphone owners are checking their phones and among these people, a large majority use that time to scroll through Facebook.[1] In the modern age, social media sites have become a catalyst for news, a main source of entertainment, and a major tool for socialization. But social media isn’t just about connecting with our social circles, it has become a tool to connect us with public figures, our preferred brands, businesses, and even our favourite charities.

Thanks to the Internet revolution, and social media in particular, charities have reach like never before. Social media platforms help nonprofits connect with their supporters, raise awareness, and fundraise, for the most part at little to no cost – making an engaged following one of the greatest assets a charity can possess in the modern era.[2]

Like any kind of fundraising channel, text-to-donate requires promotion in order to be successful. A charitable audience needs to be aware that the mobile giving channel is available to them and needs to know how it works. One of the best places to disseminate information like this is through social media. Utilizing this incredibly powerful tool has been the key to leveraging text-to-donate for many of our most successful charities of 2021, especially when one post on social media can make the world of difference. Our friends at the Nova Scotia SPCA have certainly found that ‘secret sauce’ and have now run multiple successful fundraising campaigns using social media to help spread the word.

The Nova Scotia SPCA is a registered charity that helps companion animals in need. Proudly following open-admission and no-kill principles, the organization aids more than 12,000 pets across Nova Scotia each year through animal rescue, progressive programs, and rehoming opportunities. Through their tireless work, the organization strives to give all animals that come into their care a chance at a better life and find them a loving family. Like many other SPCA’s across Canada, the Nova Scotia team do not receive any government funding to support their shelters’ daily operations – instead relying on generous community support both in person and online.[3] Social media plays an extremely important role in the organization’s fundraising efforts. Having amassed a following of over 130,000 people across multiple platforms, it is often the first place they go to promote annual fundraising initiatives and emergency appeals, including their text-to-donate call-to-action. Although first certified by the Mobile Giving Foundation Canada in 2014, the Nova Scotia SPCA hadn’t truly realized the powerful combination of social media and text-to-donate until an emergency appeal in 2019. So, when tragedy struck again this year, 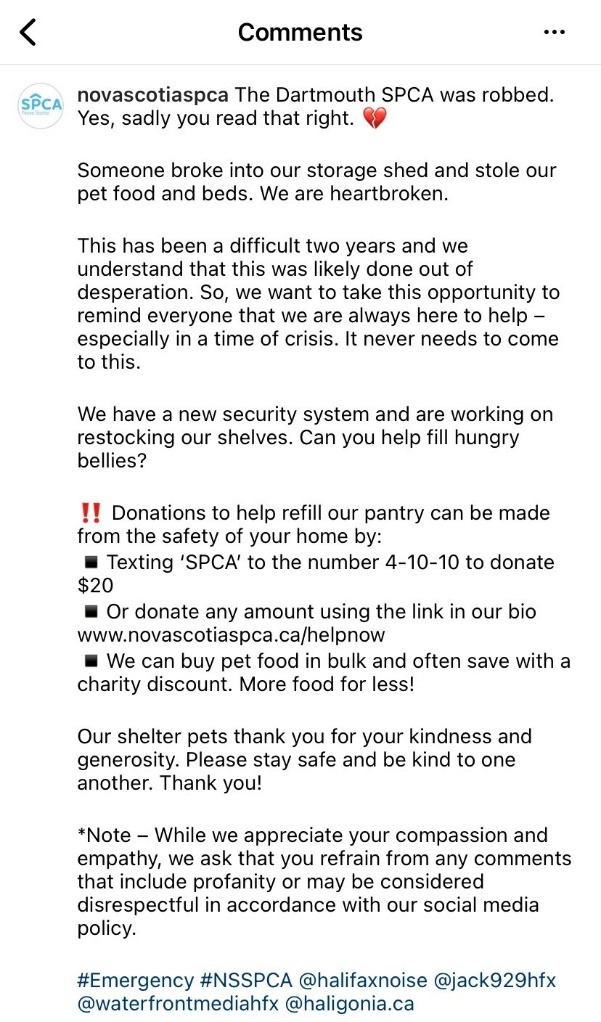 they knew they could rely on their social media following to respond with open hearts.

On January 7, 2022, the Nova Scotia SPCA shared that they had become the unfortunate victims of a robbery. “Sadly, someone broke into our storage shed and stole our pet food and beds. We were heartbroken,” said Taylor Huestis, Development Officer of Communications & Donor Relations for the Nova Scotia SPCA. The perpetrator made off with their stockpiled essentials, leaving the organization scrambling to provide for the animals in their care. In the wake of the break in, the SPCA took to social media, publishing a post on their Facebook, Twitter, and Instagram which alerted their followers of the tragic events. In addition to explaining their precarious situation in an engaging easy to read format, the post itself also featured captivating imagery, thoughtfully placed emojis, a link to their website, and featured their text-to-donate call-to-action “Text SPCA to 41010 to donate $20” in concise language.

Despite having only published once on their respective social media sites, the outpouring of support was overwhelming and instantaneous. “We posted once!” Taylor excitedly reported, “However, given the nature of the incident, the community shared the news far and wide.”

Thousands of followers across the Nova Scotia SPCA’s social media accounts liked, shared, and retweeted their initial post, amplifying it beyond a point they could have imagined and that same incredible support was reflected in the donations they received. Within 1 hour of posting their emergency appeal to social media, the Nova Scotia SPCA had raised over $5,000 through the text-to-donate platform and by the end of the day, donation revenue had reached $32,000! That same spirit of giving continued for days after and by the end of the month, more than $48,000 had been raised through mobile giving alone. 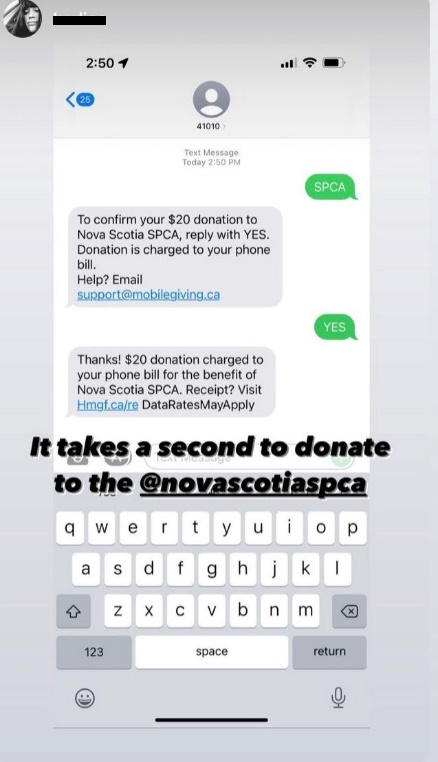 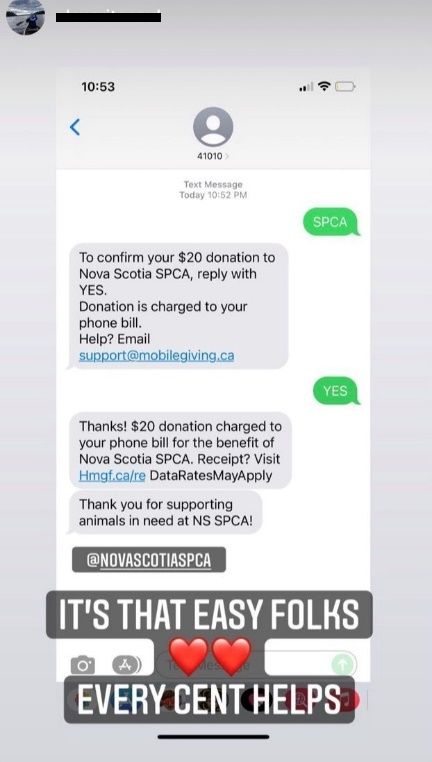 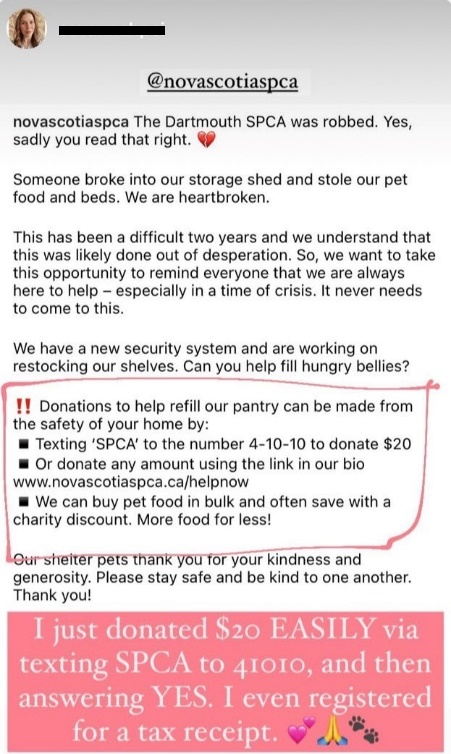 In addition to donations, the SPCA received some wonderful feedback from their donors about the option to text in a donation “Everyone LOVED the text-to-donate option! We received so much positive feedback that it was quick, easy to use, and very convenient for folks without credit cards. We were experiencing an emergency situation. Text-to-donate took out all the extra steps and made it easy for our donors to show their support right away.”

When we asked Taylor if Nova Scotia SPCA planned to continue using text-to-donate for future fundraising opportunity, her response echoed the same positivity of their donors: “Most definitely. We will always include text-to-donate and are so thankful to have this platform at our fingertips.”

We’d like to thank Taylor Huestis of the Nova Scotia SPCA for taking the time to answer our questions about their experience leveraging text-to-donate. We would also like to take this opportunity to remind our readers that spring and summer are incredibly busy seasons for SPCA’s and your continued support can make the all the difference for animals in need. If you’d like to make a donation to the Nova Scotia SPCA, you can text SPCA to 41010 to donate $20, or visit: www.novascotiaspca.ca/donate 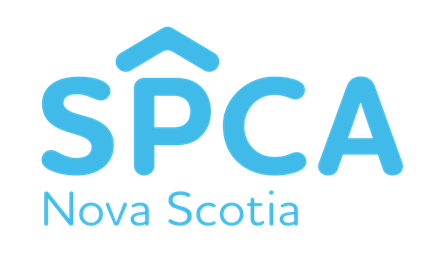 2022 was another great year for MGFC! Click the image below to see some highlights🤩 pic.twitter.com/L5FpDDkyZL

Don’t forget to send you child with a Loonie or Toonie for our Family Literacy Day. You can send these donations in all week. Every dollar we raise stays at the school for books. Education Matters grant match what we raise and that money goes to a school less fortunate than us. pic.twitter.com/Dk0C3sqRig Retweeted by Mobile Giving Foundation Canada